One hundred years before Columbus and his fellow Europeans began their voyages of discovery, fleets of giant junks commanded by the eunuch admiral Zheng He and filled with the empire’s finest porcelains, lacquerware, and silk ventured to the world’s “four corners.” Seven epic expeditions brought China’s treasure ships across the China Seas and Indian Ocean, from Japan to the spice island of Indonesia and the Malabar Coast of India, on to the rich ports of the Persian Gulf and down the East African coast, to China’s “El Dorado,” and perhaps even to Australia, three hundred years before Captain Cook’s landing. It was a time of exploration and expansion, but it ended in a retrenchment so complete that less than a century later, it was a crime to go to sea in a multimasted ship. In When China Ruled the Seas, Louise Levathes takes a fascinating and unprecedented look at this dynamic period in China’s enigmatic history, focusing on the country’s rise as a naval power that briefly brought half the world under its nominal authority.

Drawing on eyewitness accounts, official Ming histories, and African, Arab, and Indian sources, many translated for the first time, Levathes brings readers inside China’s most illustrious scientific and technological era. She sheds new light on the historical and cultural context in which this great civilization thrived, as well as the perception of China by other contemporary cultures.

Beautifully illustrated and engagingly written, When China Ruled the Seas is the fullest picture yet of the early Ming dynasty—the last flowering of Chinese culture before the Manchu invasion.

“Levathes tells her story in a lively style, and details her sources meticulously.” —The New York Times Book Review

“Fascinating . . . The story Levathes tells so skillfully could scarcely be more timely.” —The Washington Post

Louise Levathes was a staff writer for National Geographic for ten years and writes for the New York Times, the Washington Post, the Atlantic, and other publications. In 1990 she was a visiting scholar at the Hopkins-Nanjing Center for Chinese and American Studies at Nanjing University in China. 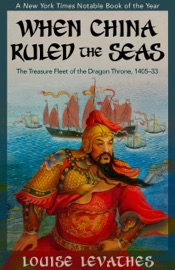