Set a thousand years before the events of Star Wars: A New Hope, Drew Karpyshyn’s electrifying Darth Bane novels take us deep into the dark side. This action-packed series follows the transformation of a lost young man who becomes a legendary Sith Lord, able to wield the awesome power of the Force as never before. Packed with nonstop thrills, the entire Darth Bane trilogy is now available as an eBook bundle featuring

PATH OF DESTRUCTION
RULE OF TWO
DYNASTY OF EVIL

After a high-stakes card game ends violently, Dessel, a lowly miner, vanishes into the ranks of the Sith army and ships out to join the war against the Republic and its Jedi champions. There, Dessel’s brutality, cunning, and exceptional command of the Force swiftly win him renown as a warrior. But in the eyes of his watchful masters, a far greater destiny awaits him . . . if he can prove himself worthy. As an acolyte in the Sith Academy, studying at the feet of its greatest masters, Dessel embraces his new identity: Bane. However, in order to gain full acceptance into this chilling Brotherhood, he must surrender completely to the dark side. Only by defying the most sacred traditions of the Sith can Bane hope to triumph—and forge from the ashes a new era of absolute power. 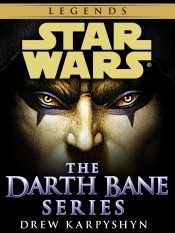