It was the quintessential American success story: Identify a niche; form a company to exploit it; raise millions in venture capital; take the concept public; meet stockholder expectations for 40 straight quarters, in the process becoming a darling of Wall Street; and of course make money plenty of it while the stock price steadily climbs and revenue projections increase. In a few short years you ve gone from rags to riches...you re on a monster roll... Until your boss, saddled with the realization that the Street expectations cannot realistically be met, asks you to creatively fix the numbers. It s the toughest decision you ve ever made, and one where the easiest way out could be the most difficult, given the circumstances. Caught squarely between greed and fear, Aaron Beam did the unthinkable. Corporate greed is the Black Plague of the modern financial world threatening America s ability to maintain free market capitalism in an increasingly distrusting, changing, and socialistic world economy. The Wagon to Disaster, told by former co-founder and CFO Aaron Beam, is the untold story of HealthSouth, one of America s most successful health care companies and consequently, the perpetrator of one of its biggest frauds in history. How big was the fraud? In 2003, just before news of the crime broke in the mainstream media, HealthSouth paid more money in taxes to the Federal Government than it legitimately earned the previous year. Beam takes the reader from HealthSouth s humble beginnings, through its meteoric rise and to its disastrous revelation, subsequent trial and his three-month incarceration in a federal prison. Moreover, he reveals the nature of the fraud and the true personality of the driving force behind HealthSouth Richard Marin Scrushy, one of the most enigmatic, nefarious characters the State of Alabama has ever produced a hard-charging, unscrupulous visionary whose caustic, Machiavellian approach ensured HealthSouth s success, and oddly, his predictable fall as the company s benevolent dictator. 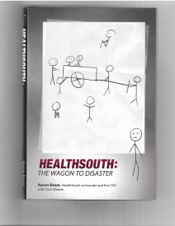