The kingdom teeters on a knife edge, and one man would throw it into chaos…
Autumn, 1379. The power of the crown is invested in John of Gaunt, and the kingdom is seething with discontent. The French are attacking the southern ports and the peasants are planning a revolt organised by a mysterious leader who proclaims himself as ‘IRA DEI’, the anger of God.
When Gaunt’s plans to win over the merchant princes of London are plunged into chaos by a series of bloody murders, he turns to Sir John Cranston to bring the assassin to book and to recover a king’s ransom in gold which has disappeared.
Cranston naturally calls on his ally Brother Athelstan. London is a hotbed of intrigue and they find it difficult to distinguish between friend and foe. They must face deadly threats not just from the powerful elite, but from the seedy underworld of medieval London.
The fourth instalment in the gripping historical mystery series, perfect for fans of C. J. Sansom, S. J. Parris and Susanna Gregory. 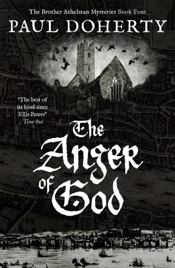