What happens when you hear the call to fly to the most remote population center on Earth, home base for ecovillages, black sand beaches, and a volcano goddess living in a molten lake of lava? You GO!

Upon landing, Andrew feels instantly welcome. On his first night, a new friend asks him if he’d like to go on a volcano adventure with her. “Are you serious?” he says. “Yes, of course!”

After picking up some gas masks the following day, they head to Hawai‘i Volcanoes National Park, hiking down a secret road toward a massive red glow in the distance. By nightfall, Andrew and his new friends are standing on the edge of a huge lake of bubbling lava, radiating a warmth that feels like the sun on a cloudless day. Its beauty leaves him speechless, but his adventure has only just begun. 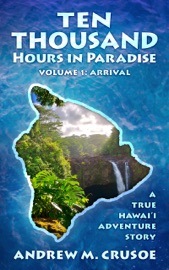