He’s determined to uncover all her secrets, at any cost.

India Gale had it all—a coveted job, a fancy Manhattan apartment, and a privileged life. But a tragic accident took almost everything. Consumed with guilt and hounded by the media, she retreats to Glacier Creek, Montana, to rebuild. She plans to keep to herself, until a stranger arrives in town—a ruggedly handsome newcomer who makes her knees tremble and resolutions to remain alone crumble.

Former Special Ops soldier Lucas Talbot spent his childhood summers in Glacier Creek. He has one more mission to complete to finally bring his mother, and himself, peace—discover why his stepfather was with India the night he died, and why she received a fifty million dollar settlement afterward. He isn’t prepared to find a sweet, vulnerable woman who brings out his protective instincts and makes him long to claim her for his own.

But when India discovers the truth, will it destroy her newfound happiness and Lucas’ chance for love?

First published as A Soldier’s Homecoming 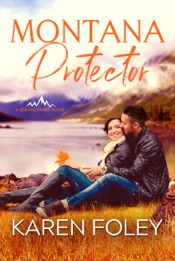