In this study of the encounter between Vietnam and the United States from 1919 to 1950, Mark Bradley fundamentally reconceptualizes the origins of the Cold War in Vietnam and the place of postcolonial Vietnam in the history of the twentieth century. Among the first Americans granted a visa to undertake research in Vietnam since the war, Bradley draws on newly available Vietnamese-language primary sources and interviews as well as archival materials from France, Great Britain, and the United States.
Bradley uses these sources to reveal an imagined America that occupied a central place in Vietnamese political discourse, symbolizing the qualities that revolutionaries believed were critical for reshaping their society. American policymakers, he argues, articulated their own imagined Vietnam, a deprecating vision informed by the conviction that the country should be remade in America's image.
Contrary to other historians, who focus on the Soviet-American rivalry and ignore the policies and perceptions of Vietnamese actors, Bradley contends that the global discourse and practices of colonialism, race, modernism, and postcolonial state-making were profoundly implicated in--and ultimately transcended--the dynamics of the Cold War in shaping Vietnamese-American relations. 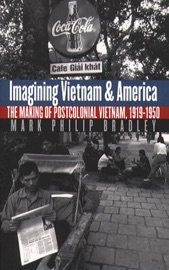