Years ago, Rhodes knew Sienna as a young, gawky girl who was all elbows and carrot-colored hair without an ounce of grace. Despite her clumsiness, she'd had something special about her even then. Now she's all grown up, and Rhodes still can't seem to ignore her. One glimpse has him thinking about a lot more than old times. But, sweet and lovable as she is, Sienna has rightly been called a trouble magnet--even while inside a military- secure compound that should be the ultimate safe haven.

Sienna had an epic-sized crush on Rhodes when she was a kid and he was her brother's best friend. Now he's a grown man, hunky and hotter than her wildest fantasies could have imagined. New to the job at Levi's company, Legendary Securities, she doesn't want to jeopardize her position by spending all her time daydreaming about Rhodes so close to her now and yet still so far away.

When she's asked to help on a mission, she eagerly agrees, hoping to score some points with her employer…except she inadvertently triggers a sequence of disastrous events that no one--even one familiar with Sienna's klutziness the way Rhodes is--could have predicted. 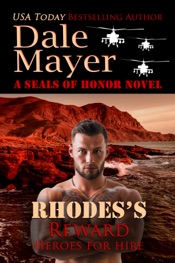