‘Of the many anthologies coming out of university writing programs, the annual UTS collection has always been the standout.’ Kerryn Goldsworthy, The Sydney Morning Herald

The UTS Writers’ Anthology is an annual publication produced by the University of Technology Sydney. Students from the undergraduate, postgraduate and research programs submit their work anonymously, and a student editorial committee selects and edits the Anthology over a period of four months. In 2016, from over 300 submissions, the committee selected 25 outstanding pieces.

Over the years the Anthology has featured UTS alumni who have gone on to make names for themselves as authors. Gillian Mears, Bernard Cohen, Jill Jones, MTC Cronin, David Astle and Arabella Edge, along with more recent emerging authors such as P.M. Newton, Clinton Caward, Julie Chevalier and Isabelle Li, have all had early or indeed their first publications here.

In addition, the Anthology has been supported by forewords from leading writers such as James Bradley, Delia Falconer, Nam Le and Anna Funder – many of whom have been involved with the UTS creative writing program, and who have acknowledged the outstanding talent of its students. The foreword to the 2016 Anthology is by the author of The Rosie Project, Graeme Simsion. 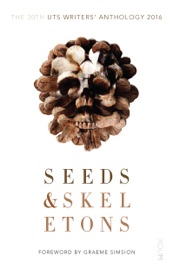