“In the summer of 1947, when the creation of the new state of Pakistan was formally announced, ten million people—Muslims and Hindus and Sikhs—were in flight, By the time the monsoon broke, almost a million of them were dead, and all of northern India was in arms, in terror, or in hiding. The only remaining oases of peace were a scatter of little villages lost in the remote reaches of the frontier. One of these villages was Mano Majra.”

It is a place, Khushwant Singh goes on to tell us at the beginning of this classic novel, where Sikhs and Muslims have lived together in peace for hundreds of years. Then one day, at the end of the summer, the “ghost train” arrives, a silent, incredible funeral train loaded with the bodies of thousands of refugees, bringing the village its first taste of the horrors of the civil war. Train to Pakistan is the story of this isolated village that is plunged into the abyss of religious hate. It is also the story of a Sikh boy and a Muslim girl whose love endures and transcends the ravages of war. 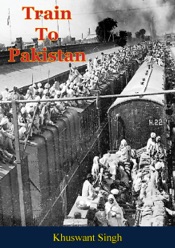