With 150 wins to his name, Steve Williams is one of the most successful caddies of the modern era. From his modest start in freelancing his way around the world’s golf courses, he became a man in demand, working with some of the golfing world’s best. Greg Norman, Raymond Floyd, Terry Gale, Ian Baker-Finch, and Adam Scott all benefitted from the knowledge, experience, and honesty for which Williams is known.
Williams is perhaps best known, however, for his triumphant thirteen years on the bag of Tiger Woods. Together, Woods and Williams won more than 80 tournaments—with 13 major championships among them.
But it wasn’t all celebrations. Despite his best efforts, Williams could only watch as Woods fell from the podium, his game in decline—ignorant of the scandal about to make headlines around the world that would nearly ruin Tiger’s pro career.
In this candid book, Williams tells the stories of golf’s elites that you won’t hear anywhere else—the highs and lows of their careers, and the critical role of a caddie in both spots.
Bold and entertaining, his story offers a rare insider’s view of the professional golfing world. 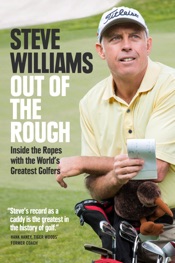