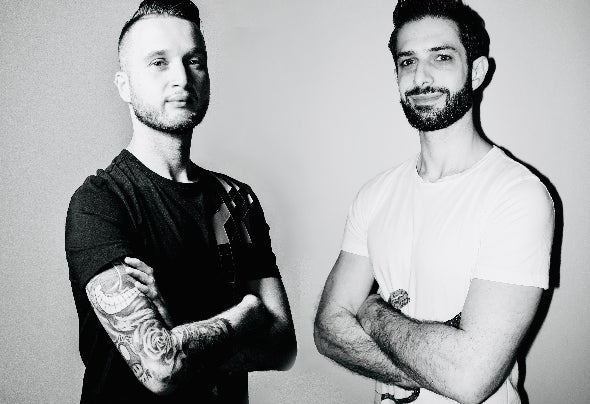 Like two interlocking puzzle pieces, Dog n Hoss discovered their place in house music. When they first entered the studio their electric chemistry was clear. Each brought something to the board that helped propel their production prowess to previously unmatched levels. Their debut label release “I Scream” on Rock Bottom confirmed the electric vibe the duo exudes. Supported by Black V Neck, El Monk, FOOLiE, and Ocean Roulette. An unprecedented run for a new artist, the EP stormed the Beatport charts and hit number one in the overall, tech-house, and bass house release charts. It did damage in the singles charts as well, reaching the top five in bass house and top 20 in tech-house. With such a standout premiere, labels are clamouring to sign their upcoming work, and they’ve already locked in releases with OFDM, Spoon Fed, Groovy Bone, and Cartel Collective. Mike and Brad have known each other since high school but had taken different musical paths. Mike played lead guitar in a few different rock bands and took a deep interest in songwriting. Brad dove head- first into dance music. Eventually finding himself organizing events and playing direct support for Chocolate Puma, Bijou, Shiba San, Prok & Fitch, GAWP, Gene Farris, John Summit, Westend, and Destructo. After years of dancing around it, they decided to put their heads together in the studio. Whereas Brad had a deep understanding of phrasing and dancefloor appeal, Mike understood the finer details of production and sound design. The balance in their partnership has allowed them to create a sonic footprint that is unique and driven by creating peak dance floor experiences.